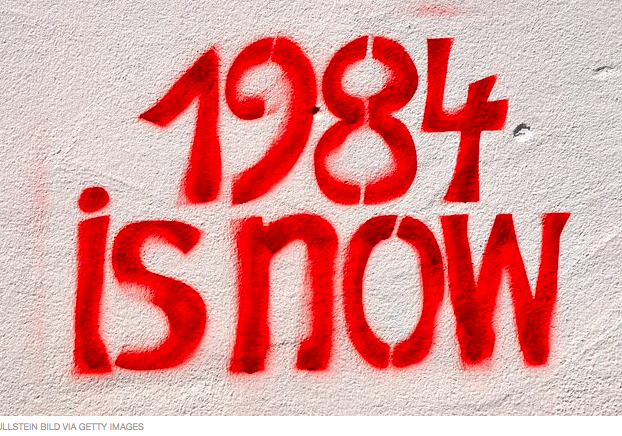 A dystopian world in which war is peace, freedom is slavery, and ignorance is strength doesn’t seem all that far-fetched to some students now studying George Orwell’s 1984.

Teachers who have assigned the classroom staple this year report that teenagers’ reactions to the text are different than in years past. All of sudden, they say, students are recognizing their own country in Orwell’s work of fiction.

“There’s less shock compared to years past,” said Michigan teacher Mike Becker. “A lot of students came up to me in the last few weeks and said stuff along the lines of ‘We’re living in 1984.’”

The novel 1984 ― which was published in 1949 ― describes a society in a state of never-ending war, where a repressive government led by “Big Brother” constantly surveils its citizens. The main character works for the Ministry of Truth, which actually oversees propaganda.

A lot of students came up to me in the last few weeks and said stuff along the lines of ‘We’re living in 1984.’
Mike Becker
Sales of 1984 skyrocketed in recent weeks after presidential adviser Kellyanne Conway described lies from White House Press Secretary Sean Spicer as “alternative facts.” Adult readers may have drawn a connection between Conway’s remarks and Big Brother’s manipulation of facts. Students appear to see that connection as well.

Becker has been teaching 1984 to his high school students for over six years. While the kids in his rural community have always compared the book’s plot to news events, the comparisons this year are heightened, he said. Students point to the real-world concepts of “fake news,” constant surveillance and media bias reflected in the text.

The teens, who come from a county that voted for President Donald Trump, don’t seem particularly bothered by the idea of government omnipresence, their teacher noted.

“We self-monitor through things like social media, Snapchat, Instagram. We have these mini-cameras in our pocket,” Becker said. “That becomes so common for them, I think, on a daily level on that scale [that] the vast complexity scale of government surveillance doesn’t really frighten them as much.”

A few doors down from Becker, Aric Foster also taught 1984 this academic year. Even though his students read the book back in September, he said, one kid recently linked it to Conway’s “alternative facts” remark.

“One of them asked the other day, ‘Isn’t the whole discussion of alternative facts very similar to the 1984 idea of doublethink?’” said Foster. “The political climate is actually helping the children connect to the literature in ways that they haven’t done before.”

Across the country, in a suburb of Portland, Oregon, teacher William Milburn said the connections that his students are drawing between 1984 and the present are “inspiring but also heartbreaking at the same time.”

One of them asked the other day, ‘Isn’t the whole discussion of alternative facts very similar to the 1984 idea of doublethink?’
Aric Foster
Milburn teaches a diverse group of students in a progressive community. He thinks the book has given them a sense of urgency about the need to fight government oppression.

“They are looking at comments Trump has made about voter fraud, Spicer’s comment about the inauguration, Kellyanne Conway’s ‘alternative facts,’ and it just rings so similar to them about doublethink and an authoritarian government fluttering our news with information ― some true and false ― but all of it exhausting in the long run,” said Milburn.

He recalled one student saying “they’re worried about the EPA and other agencies being able to talk about climate change ― something we agree is a real thing and is fact and it’s possibly going to be censored.”

The current crop of high school students were born around the time of the 9/11 attacks and grew up during the U.S. wars in Afghanistan and Iraq, so they can also relate to the idea of perpetual war, Milburn said.

Overall, the teacher said, the book makes students concerned about the future. But they seem determined to fight back.

“A connection they’re also making to the story is about the importance of bravery,” said Milburn, “that it’s OK to question and challenge information that intuitively goes against our collective thoughts and beliefs.”