Skip to content
May 21, 2018 Lynda Filler Novels and Novellas

More Alive Than Ever

This is a very special review and I wanted to share it. Thank you Gabriel Constans for your very kind words.

Love: The Beat Goes On by Lynda Filler.
Reviewed by Gabriel Constans. 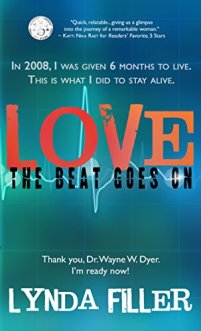 Her life was flying, her heart was dying. Lynda Filler had a new job, loving family, and an almost too good to be true newly acquainted man she called “my cowboy”. There’d been for-warnings, “messages”, shortness of breath, but nothing really stopped her in her tracks (literally) until 2008 when she is told she has a form of congestive heart failure called dilated cardiomyopathy. Doctors told her it was a death sentence and she must “get your affairs in order”. Nine years later, after driving alone for many months between Canada and Mexico, visiting a shaman in Sedona, New Mexico, and realizing, “I was the change that needed to happen in my healing”, she wrote Love: The Beat Goes On. She’s more alive than ever.

I worked with hospice and bereavement programs for many years. Most people…

I'm a writer, a poet, a dreamer, and a lover. I live wherever life takes me, currently in Istanbul, Turkey; and I create beautiful images and thoughts and put them on paper. I love words, paint, the lens, and I create from what I see. You never know what I'm going to write on my blog! But you will find 17 published books on Amazon. My latest is a memoir CAFE CONFIDENTIAL. Thanks for following me! #LOVE View all posts by Lynda Filler