I thought we might enjoy a male point of view. I #LOVE Ryan Holiday, and his philosophy on life. Next year my goal is to rank on his list!

My motto for this year: If your goals don’t scare you, they’re not big enough. 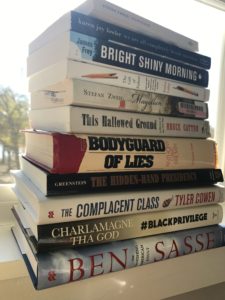 Every year, I try to narrow down the hundred plus books I have recommended and read down to just a handful of the best. The kind of books where if they were the only books I’d read that year, I’d have still have felt like I made a big leap in my education.

I know that people are busy, and we don’t always have time to read as much as we like. Nothing wrong with that (though if you want to read more—don’t look for shortcuts—make more time!). What matters is that when you do read, you pick the right books.

My reading list email is now nearly 90,000 people, and I can tell pretty quickly when a recommendation has landed well. I promise you-you can’t go wrong with any of these. (Also as an accidental confirmation of what I wrote in Perennial Seller, the newest book in this list is 5 years old and the oldest is 79 years old.)

Bodyguard of Lies: The Extraordinary True Story of D-Day Vol I & Vol II by Anthony Cave Brown and The Hidden-Hand Presidency: Eisenhower as Leader by Fred I. Greenstein
I have recommended a lot of books on strategy over the years but these two books are two of the best. And I’d never even heard of them before this year. Bodyguard of Lies is in a sense about D-Day but it’s more fully the history of almost every special, covert operation of the Second World War (in fact, Vol I focuses so much on prehistory that it ends with D-Day starting). The premise here is that the Americans believed that the war could be won by overwhelming force. The British—Churchill especially—knew better. They knew how bad their position really was, how far behind they were. Thus the Churchill quote: “In war the truth is so precious it must be surrounded by a bodyguard of lies.” The result was a strategic campaign of misinformation, deception, and intelligence designed to disorient and confuse the Germans and Japanese. The Allies had broken Enigma, they could read the German’s communications, but how could they act on it without giving their access away? How could the Allies hope to land in Europe without being met with overwhelming resistance? Well, they needed to keep as many German troops as possible occupied in different theaters, they needed to spread their defenses out as far as possible, they needed to make the obvious intended landing spot too obvious so that they would assume an attack would come elsewhere. And don’t even get me started about the covert agents they had working inside Germany and the conspirators working against Hitler from the inside. Anthony Brown doesn’t just tell you all this happened, he shows you how it happened, explained why it happens and makes you understand how expertly done it all was. The book is a masterclass in the art of strategy. (No wonder it was one of John Boyd’s favorites).

The Hidden-Hand which I read around the same time is equally a masterclass in leadership. It will give you not just a new appreciation of Eisenhower, but teach you how real leaders get things done: it’s not through talking, it’s not through looking tough, it’s through organization, delegation and through behind the scenes influence. I had no idea how Machiavellian Eisenhower was—and while that might seem like an insult, it isn’t. The perception of Eisenhower was that he was a sweet old guy who didn’t keep up on the day-to-day goings of politics but this was all a brilliant act. He wanted to be seen as above politics when in reality, he knew exactly how to make hard decisions and steer the country in the direction it needed to go. For instance, people think Eisenhower didn’t do enough to take down Joseph McCarthy. Eisenhower is the one who took McCarthy down—he just didn’t think the president should be seen doing such a thing (His rule was: Never engage in personalities). Eisenhower was what a leader was supposed to be—both an impressive and inspiring figurehead as well as an effective executive. Our leaders today could take a lesson from that.

I’ve already raved about both these books to a number of politicians, CEOs, and writers I know. I am also using them as a source in my next book, Conspiracy. Please read them.

In 2008 I was told my heart condition was not responding to medication and to get my affairs in order. I’ve never been known to back down from a challenge so I fought back. And I’m still here baby!!

This is what other’s are saying about my story published on Amazon.

“You (your book) have been so encouraging after a cardiomyopathy diagnosis. The doctor had NOTHING encouraging to say. I left his office in shock.” anonymous to respect privacy.

“Her story is honest, straightforward, and powerful, and many readers will be able to connect well with her experiences and how her spirit came to believe that sometimes the impossible can be made possible with the way we think.”
Reviewed by Mamta Madhavan

“Her emphasis on the need to always listen to your body and not ignore any warning signs made this a compelling read.”

“I know any number of people who have been given a death sentence and suffer years of treatment. When Lynda Filler was given this same prognosis, she decided to defy the odds and embrace life. Her choice to believe the impossible and live the imaginable is truly inspirational. I loved her energy, her zest for life – both of which are evident on every page of this book.” G. Plano

“This is a book every human alive should read and take away the lessons given. If I could give it ten stars, I would. It’s that good.” J. Sikes

My story is a crazy miraculous journey. I hope you enjoy it and get a copy for family and friends. #LOVE

I drive people crazy!! My exes, my kids, and my staff—when I held down a corporate job! I believe people are innately good. I’m the eternal optimist! I want the best for my friends, my family and—if you can believe this—my ex-boyfriends and ex-husbands. Yes, of course, a woman with such a flaw would have a series of exes and unfulfilling relationships.

When I healed my physically broken heart (I was diagnosed in 2008 and given 6 months to live), I started to write my story. And then a coach/mentor said to me: “But what if you die?” So I stopped writing the story and waited to relapse. And then my “eternal optimist” flaw kicked in and I published LOVE The Beat Goes On this year. F**k her! And yes, I swear—I can’t seem to fix that either.

I’ve been called “A woman of privilege and passion” (by a jealous reviewer.) She said it like it’s a bad thing. If believing in love and life and healing, and doing everything I can in my emotional power to work towards a great life, is “leading a life of privilege” so be it.

Yes, I have haters. And they attack me through my books, and probably whisper about me behind my back, and for sure wish that I would change. But as much as the world would like me to be a pessimist, to follow the path of the average depressed man/woman, I can’t seem to do it. It’s not me!

One of my best friends calls me Kumbaya Lady! I know she loves me but she wishes I would change. I too am waiting for the myth of “old age depression” to kick it, but something tells me that it isn’t going to happen!

“This is a book every human alive should read and take away the lessons given. If I could give it ten stars, I would. It’s that good.” J. Sikes, 5 Stars

The most important lesson in life is to learn to be happy. In order to do this, you must find a way to fall in love—with yourself.

The movies, books, TV, social pressures all tell us that happiness is about money, success, prestige, finding a mate, having children. I will tell you that if you are looking for those things to make you happy in this lifetime, you will always be searching.

So look for peace and joy in the simple pleasures of life. Learn about the things that interest you. Be a loving daughter, mother, father, son, or friend.

Find your passion, the things in life that make your heart sing. I write, sometimes paint, love to read, love to travel, discover new things, people, food. Find your passion because no one can ever take your inner happiness and peace away. Learn this lesson early by asking the question you have asked me; and practice what fulfills you and makes your heart sing.

And if anyone tells you you’re selfish, so be it. In the end, we come into this world alone and we exit in the same fashion. But along the way, my friend, learn how to love yourself and you will never be lonely.

I’ll share with you something that took me the first 50 years of my life to learn: “I love and approve of myself exactly the way I am, and I’m willing to change.”

It’s been on my daily calendar since forever. It allows me to accept the things I cannot change about myself—hey, I’m getting older, it’s inevitable. And I know that I’m worthy of love no matter what life tries to tell me.

If you can work on acceptance of what you see as your ‘faults’ physical or mental, you will have a happier life. And that doesn’t mean that we don’t grow and gain knowledge and wisdom, it means that we no longer have to depend on someone outside our self for our own self-worth.

There is no lesson you will learn that is more important than looking in the mirror and saying “I love you. I am enough.” 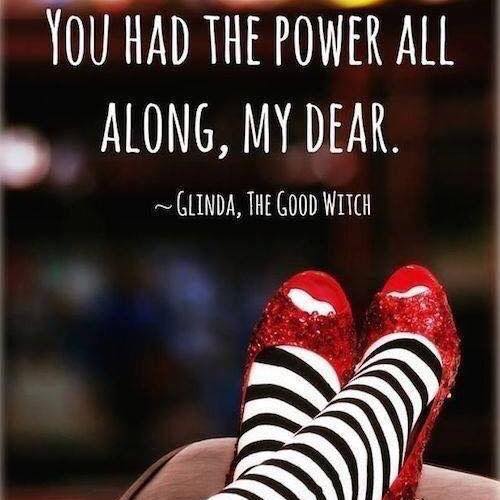 I don’t think I’m asking for too much. All you Quora techies make it happen!

Rule #2: #Believe In Yourself

Rule #8: Don’t Get Stuck In Victim-Hood

Rule #10: Stay Connected To Your Mortality

One will resonate above all others for you.

In my case, I underlined three.

1- #Believe In Yourself–which happens to be Evan Carmichaels ONE WORD #Believe. #LOVE is my ONE WORD that best describes who I am and what I stand for.

3- This is a belief shared by most successful people–Develop Good Morning Routine.

Evan Carmichael: thanks for your amazing site http://www.evancarmichael.com and for your work at  Entrepreneurship, Business, Success #Believe 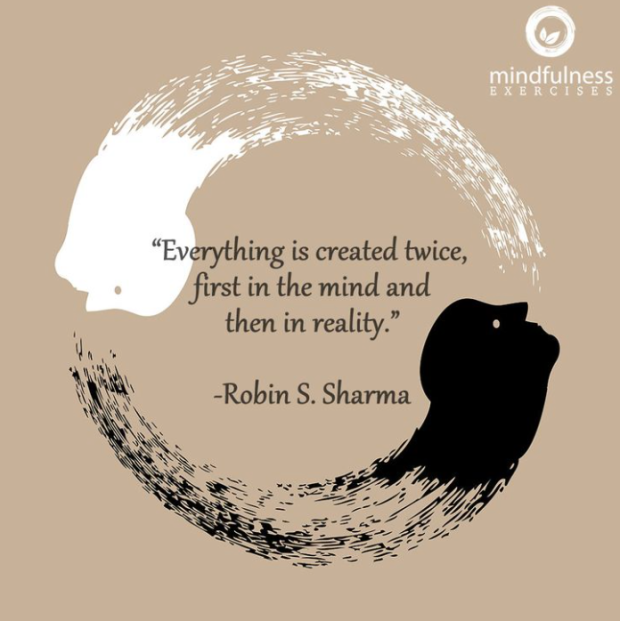